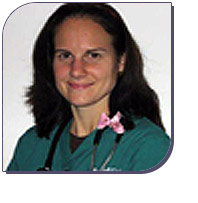 Jennifer Larson, LVT, CPhT received her Bachelor of Science degree in Veterinary Technology from Quinnipiac University in 2006.  During her educational career at QU, Jennifer was also a member of the Quinnipiac University Division I Women’s Lacrosse Team and of the QU Organization of Future Veterinary Professionals, which helped raise funds for non-profit organizations.  In 2004, Jennifer’s interest in pharmacology and pharmaceuticals motivated her to further her education to become a Certified Pharmacy Technician where she received her certification in affiliation through Dowling College.
Jennifer has been part of the VMCLI family since 2007, where she began as an ICU Technician for the Emergency Department.  After a few short months, Jennifer took on the role of Head Technician where she directly planned and coordinated technical staff to promote greater efficiency and quality of care for patients.  In 2009, Jennifer became Hospital Supervisor while maintaining the Head Technician position, where she took on a greater function in facilitating the hospitals needs.

Jennifer resides on the South Shore of Long Island, where she spends any free time enjoying time with her family and three dogs, any outdoor activities, traveling, running, and the beach.