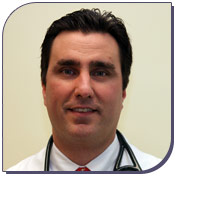 Dr. Fondacaro earned his Doctorate of Veterinary Medicine from Cornell University in 1996. At Cornell, he completed research in feline nutrition and was awarded several honors including the Upjohn & Pharmacia Clinical Proficiency Award. Upon completion of veterinary college, Dr. Fondacaro began his pursuit of advanced training in veterinary specialty. Dr. Fondacaro completed an internship in medicine and surgery at the Veterinary Specialty Hospital of San Diego in 1997. Next, he earned a Masters of Science Degree in Clinical Sciences and completed a 3-year residency in Small Animal Internal Medicine at Colorado State University in 2000. His residency training included advanced training in endoscopy and laparoscopy and he was recruited as an instructor for the Karl Storz Veterinary Endoscopy Teaching Center. During his time at CSU, he performed research and published veterinary articles on topics including diagnosis of liver disease, portosystemic shunts, feline diabetes, and feline gastrointestinal lymphoma. In 1999 he received the American College of Veterinary Internal Medicine Distinguished Research Award for his work on the diagnosis of canine and feline liver disease. He has subsequently authored textbook chapters, written scientific articles and lectured to veterinarians throughout the United States on topics in gastroenterology, hepatology, cancer and endocrinology.

Dr. Fondacaro is a native Long Islander, born and raised in St. James. In 2000, upon completion of his specialty training, Dr. Fondacaro and his wife Renee returned home to Long Island. He devoted the first year to extensive training in ultrasound diagnostics, and subsequently he was hired as the Chairman of Medicine at a veterinary referral center in Nassau County. In 2004, Dr. Fondacaro founded Suffolk Veterinary Specialty Services, PLLC and co-founded the Veterinary Medical Center of Long Island with Drs. Composto and Zaroff. For the past 3-years Dr. Fondacaro has been an executive board member of the Long Island Veterinary Medical Association, and he is currently the consulting internist for Thyrocat, a radioiodine facility in Holbrook dedicated to the treatment of feline hyperthyroidism. Additionally, he consults for numerous animal adoption and rescue centers including North Shore Animal League, PAWS, and the Guide Dog Foundation.